In 1834, a Vermont blacksmith, Thomas Davenport built a prototype electric motor, which he used in a model car, paving the way for electric vehicles in America. Thomas Edison jumped in around 1889 with a nickel-alkaline battery powered vehicle and by 1900’s; the first hybrid vehicles with names like Porsche were winning automotive races.

Long before Henry Ford’s assembly line would change the automotive world forever, Americans loved their electric vehicles. They were status symbols — fast, reliable and could perform where fuel wasn’t yet available. But by the 1920s, the American transportation culture would change and so would our automobiles. As our roads and highways grew and improved, Americans were on the move with the gasoline infrastructure in place to support the new, cheaper, gasoline-powered vehicles. The electric vehicle would fade to the background, with enthusiasts here and there, and wouldn’t make resurgence until 1997 when Toyota unveiled the “first” production hybrid vehicle. Has America’s car culture changed enough to embrace the electric vehicle again?

Today’s electric vehicles look much different than earlier models but operate on the same basic principles. An all-electric vehicle draws electricity directly from the grid (through plug-in charging) and other electrical power sources and stores it in batteries. Hybrid electric vehicles have gas-powered engines and use electricity to boost fuel efficiency. Some models can be plugged into the grid for charging.

It is not surprising to see that increased use of these vehicles along with economic changes and regulation has had an effect on gasoline consumption. All of which leads to local air quality improvements, which is a focus for many communities.

In Kentucky, the use of electric vehicles is low, giving us the perfect opportunity to plan for growth.  For 2015, there were approximately 300 electric vehicles registered with the Kentucky Department of Vehicle Regulation, with about half of those being low-speed vehicles. The typical all–electric, plug-in vehicles are around $30,000-$40,000 and have a driving range of about 100 miles between charges but some can extend up to 300 miles – with a corresponding price tag increase.  But for those long trips across Kentucky, the Alternative Fuels Data Center  lists 58 public charging stations that offer a total of 139 public charging outlets in Kentucky. These charging stations can take anywhere from 30 minutes to 8 hours to charge a vehicle, depending on the type of charger. 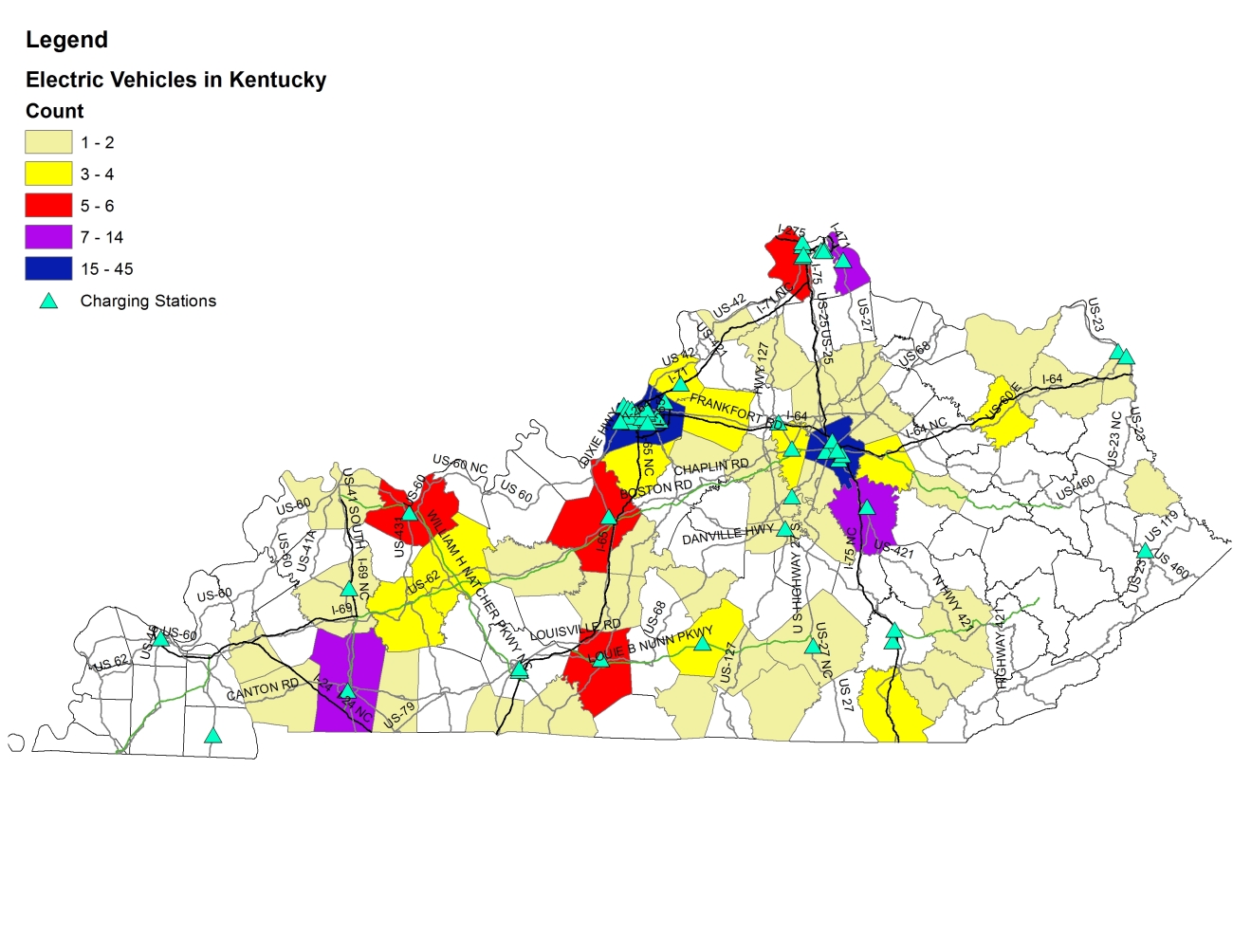 But the map of Kentucky does raise questions. If we are to assume more electric vehicles in Kentucky, then are we going to need more stations along our major highways and nationwide? These nationwide corridors are already in development. The U.S Department of Transportation Federal Highway Administration (FHWA) has developed a network of alternative fuel coordinators nationwide. In its first round of designations, FHWA solicited nominations from state and local officials. For those states not in the first round of designations, such as Kentucky, the U.S. Department of Transportation must update and re-designate the corridors within 5 years of the initial designation and every 5 years thereafter.

Evidence suggests that the tide is shifting towards alternative-fueled vehicles. The Energy and Environmental Cabinet continues to work with stakeholders such as the automakers, utilities, the Kentucky Clean Fuels Coalition and EVolve KY, Kentucky’s electric vehicle owner’s group, on all these electric-vehicle issues.