The 41st Annual Kentucky Governor’s Conference on Energy and the Environment featured an awards luncheon during which Energy and Environment Cabinet Secretary Charles Snavely handed out 10 environmental awards.

These awards reflect a commitment by those honored to preserving and enhancing this beautiful state through energy efficiency, soil conservation, mine land reclamation, farmland stewardship or innovation.

Awards given out at the luncheon included:

The Kentucky Heritage Land Conservation Fund Stewardship Award, given by the Kentucky State Nature Preserves Commission, is presented to the entity that demonstrates conservation of natural resources while developing it for sustainable passive recreation.

It was awarded to Oldham County Fiscal Court for its restoration of Morgan County Conservation Park.

Under its leadership, fiscal court did an outstanding job of restoring Morgan County Conservation Park. Native grassland species were planted and more than four miles of hiking trails were maintained through a 250-acre forest. Particular attention was paid to conserving a small cedar glade and native grassland species were planted along the park entrance for pollinators. The park is home to more than 236 plants, 14 types of mammals and 59 species of birds.

The Outstanding Kentucky Forest Steward Award, given by the Division of Forestry, is presented to the individual or couple for outstanding stewardship accomplishments involving cooperative planning and management of natural resources in an effort to prevent loss of habitat and promote sustainability.

It was awarded to Jerry and Portia Brown.

The Browns own a 122-acre tract in Grayson County and a 146-acre farm in Shelby County and have been actively involved in managing Kentucky’s natural resources for decades. Their forest management practices on those properties included 31 acres of tree planting, 91 acres of marked harvests and 97 acres of timber stand improvements. Other stewardship efforts include completing 10 acres of invasive species control, as well as 36 acres of fescue conversion to native grasses and 56 species of native wildflowers.

They have also improved water and soil resources by building a pond, stabilizing stream banks, and improving roads and trails with switchbacks, grading and drainage design.

It was awarded to the Peter Cave Mining Company. 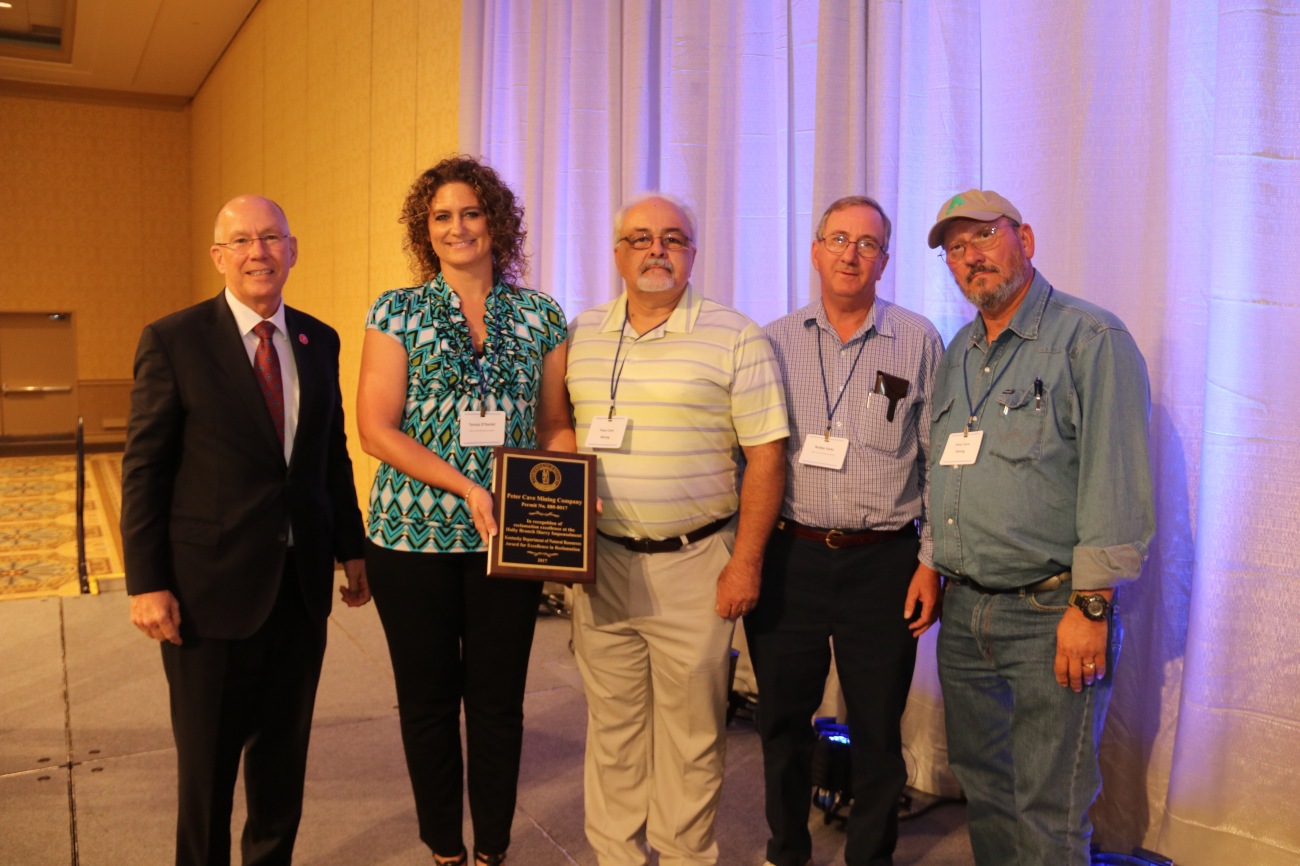 By eliminating 9,000 feet of highwall, Peter Cave Mining removed a safety and environmental hazard at the Holty Branch Slurry Impoundment, located in Martin County. Two hundred (200) plus acres of pastureland were created, which not only greatly increased the visual aesthetic of the watershed but may provide an opportunity for future economic development in areas such as cattle and horse farming.

The impoundment also has the unique designation of being one of the first in the Prestonsburg region to be successfully abandoned. Information gleaned from this closure will be helpful with future closure operations at other slurry impoundments in the region.

It was awarded to the Survant Mine, owned by Armstrong Coal Company, Inc., Madisonville, Kentucky.

The Survant Mine is an underground mine located near Central City in Muhlenberg County that extracts steam coal utilizing continuous-mining units employing room-and-pillar mining techniques.

Survant produced 700,000 tons of coal in 2016. By following safety procedures and through constant vigilance, more than 120 miners worked 588 consecutive days without a lost-time injury that year. This accomplishment demonstrates a strong culture of safety-first behaviors. Underground mining can be hazardous; however, the Armstrong Coal Company’s employees have proven that it can be done safely.

The KY  EXCEL Champion Award, given by the Department of Environmental Protection, recognizes a Kentucky EXCEL member that has demonstrated outstanding stewardship of Kentucky’s environment in the areas of energy conservation, air quality, minimizing waste or incorporating citizens to participate in environmental stewardship behaviors.

It was awarded to Sekisui S-Lec America.

Accepting the award for Sekisui S-Lec America (from left to right) was Pedro Cordoba, Randy Hardwick and Kaoru Ishikawa.

Sekisui S-Lec America, which manufactures polyvinyl butyral interlayer film for use in manufacturing automotive glass, became a KY EXCEL Partner in 2016. The company is committed to reducing greenhouse gases in all its processes, reducing waste and identifying water resource risks while reducing consumption. Sekisui S-Lec America demonstrated its commitment to “reduce/reuse/recycle” in 2016, when it reduced waste generated at its Winchester plant by 43 percent from the previous year.

Last year, 60 percent of the waste generated at the Winchester plant was either reused or recycled. The remaining 40 percent went to energy generation. The company also installed a compactor which reduces the number of waste loads shipped per year from 10 to 1, eliminating 3,708 miles of transport, 570 gallons of diesel fuel and 5,791 kilograms of CO2 emissions.

The Environmental Pacesetter Award, given by the Department for Environmental Protection, is presented to an individual or firm that has demonstrated exemplary and innovative efforts to protect the environment and to set an example of environmental stewardship for the Commonwealth.

It was awarded to L’Oréal USA Manufacturing, of Florence, Kentucky. 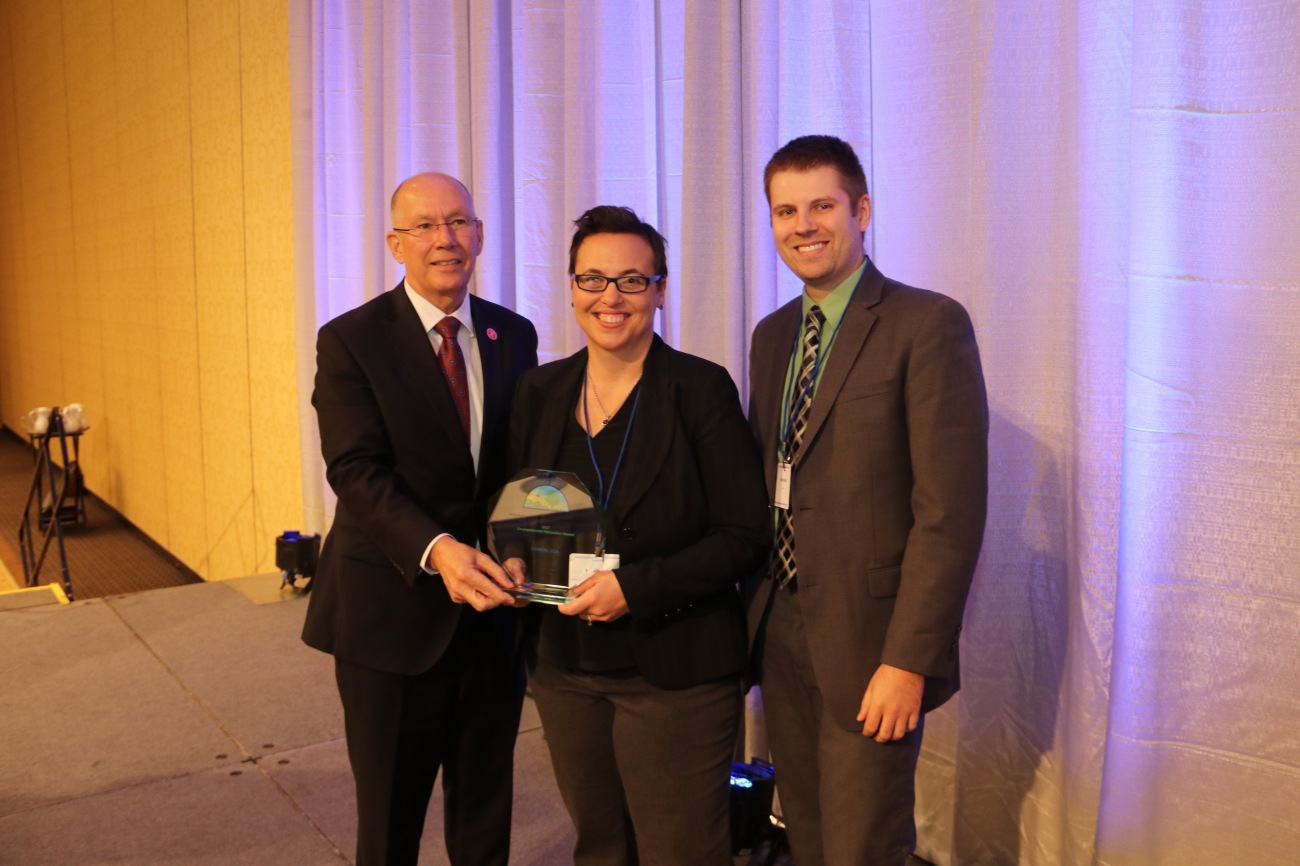 “Sharing Beauty With All” is L’Oréal’s global commitment to sustainable, responsible, inclusive growth. As part of this commitment, L’Oréal has taken an innovative step to reduce its environmental impact. In July of this year, the Florence manufacturing site began operating its new 4,100-paneled solar array. L’Oréal has projected that these panels will cut carbon dioxide emissions in Kentucky by almost 1,200 metric tons per year.

This is equivalent to eliminating more than 2.8 million miles traveled by passenger cars per year, according to EPA Greenhouse Gas Equivalencies. The array will provide L’Oréal USA with 1.42 megawatts of renewable solar power, which is expected to produce more than 50 million kilowatt hours of electricity over the next 30 years.

The Resource Caretaker Award, given by the Department of Environmental Protection, goes to an individual or firm that has improved or furthered the conservation of Kentucky’s natural resources in efforts such as revitalizing underutilized or contaminated land, habitat restoration, recycling programs, pollution prevention, water-use reductions, or energy efficiency.

It was presented to the Marker’s Mark Environmental Team.

The Maker’s Mark Environmental team partnered with the Division of Compliance Assistance and with state, federal and non-governmental organizations to significantly improve the wildlife habitat, implement reforestation activities and improve water sustainability at its distillery in Loretto, Kentucky.

A reverse osmosis system was installed to offset the use of municipal water in several operations. Existing cooling towers were replaced with air-cooled chillers, which also decreased water usage.

The parking area in front of the distillery was converted to green space and the new visitor parking area was designed so runoff is channeled through a filtration garden. Tour buses that transport visitors around the property are now propane-powered to reduce emissions and to create a more sustainable method of onsite transportation.

The Kentucky Excellence in Energy Leadership Award, given by the Department of Energy Development and Independence, recognizes energy leaders who have had a tremendous impact on the Commonwealth and who have inspired others to save energy and/or to utilize alternative energy resources.

It was awarded to the Kentucky Army National Guard and Department of Military Affairs.

Accepting the award for the Kentucky Army National Guard and Department of Military Affairs (from left to right) was COL. Steve King, CPT. Kenny Staley, Will Philips and Joe Sanderson.

The mission of the Kentucky Army National Guard is to efficiently balance requirements and resources, effectively supporting all current and future missions. It is committed to be a national leader in sustainable innovation driving by informed and empowered soldiers and civilians.

Since 2003, The Kentucky Army National Guard has reduced its energy use by 62 percent and installed 2.3 megawatts of renewable energy solutions. Despite adding 700,000 square feet of new building space, it has spent the same amount on utilities as in 2003. This effort generated an estimated savings of $3 million annually and is growing.

The Kentucky Excellence in Energy Leadership Award, given by the Department of Energy Development and Independence, recognizes energy leaders who have had a tremendous impact on the Commonwealth and who have inspired others to save energy and/or to utilize alternative energy resources.

It was awarded to Owensboro Health Regional Hospital.

This facility, which opened in 2013, is one of the largest medical facilities in western Kentucky, operating 477 beds, 30 transitional-care beds and a Level III neonatal intensive care unit.

The hospital, in partnership with Harshaw Trane, set a goal to optimize the facility using advanced building analytics to identify and remedy energy inefficiencies. As of June 2017, the hospital has achieved a 20 percent energy reduction.

These and other efforts have created a culture of continuous improvement that is reflected in substantial energy performance gains, lowered healthcare cost for the community and an improvement in the quality of care for both visitors and patients.

The Secretary’s Award, given by the Office of the Secretary of the Energy and Environment Cabinet, is awarded annually to a person, business, municipality or non-governmental organization that has demonstrated long-term leadership and commitment to sustainability, environmental protection, conservation of natural resources or is responsible for the development of energy resources.

It was presented to Toyota Motor Manufacturing, Kentucky, Inc. 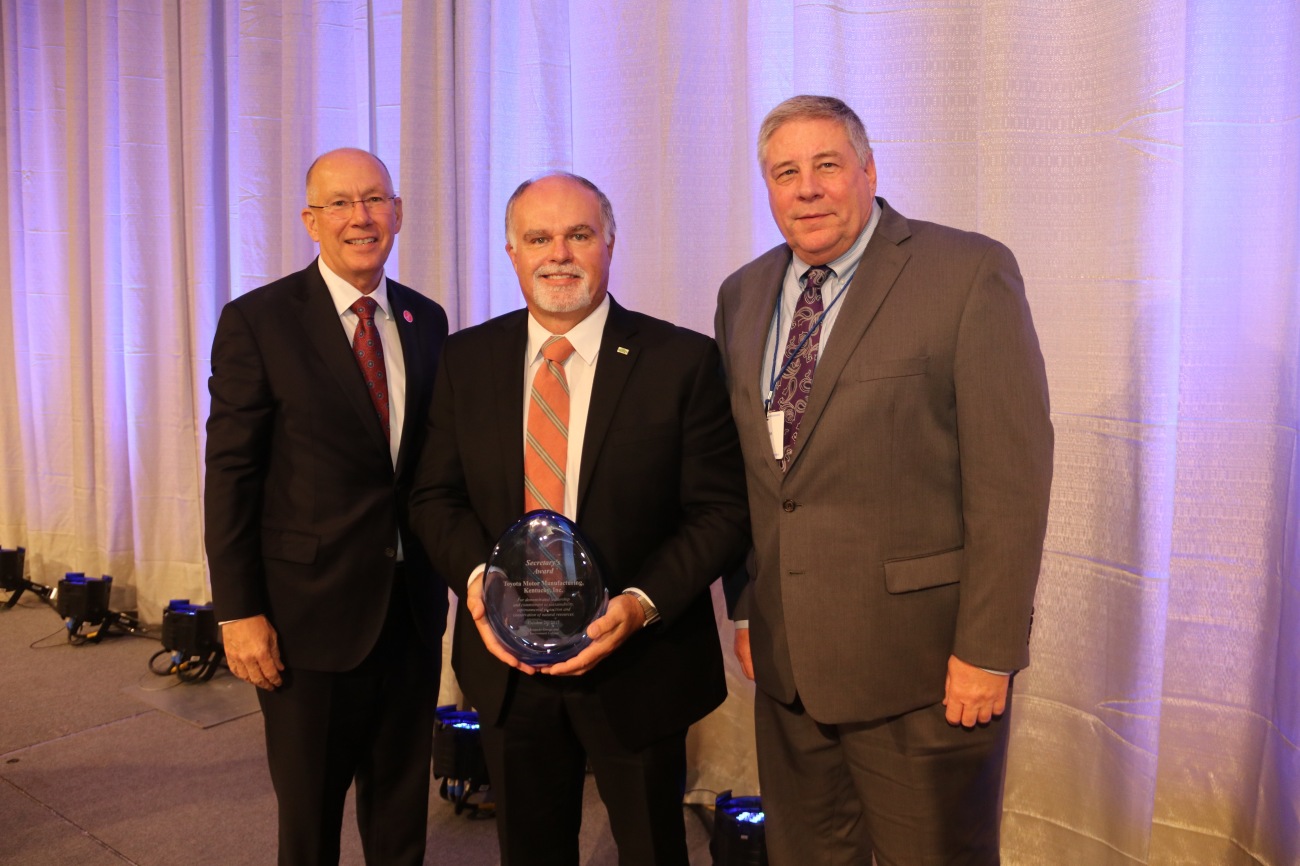 From converting methane gas into electricity to being certified by the Wildlife Habitat Council as a “Wildlife at Work” site, Toyota Motor Manufacturing Kentucky is leading the way with innovative sustainability partnerships and programs.

Two years ago, Toyota Motor Corporation (TMC) announced the Toyota Environmental Challenge 2050, a set of six challenges that go beyond zero environmental impact to achieve a net positive impact on society. These six challenges were developed after extensive research and consultations between TMC and the Toyota regions (including North America) and, over the next 35 years, will direct Toyota’s efforts toward sustainable development.

Among the 14 Toyota plants in North America, including 10 in the U.S., Toyota Motor Manufacturing Kentucky is the largest, with the capacity to annually produce 550,000 vehicles and more than 600,000 engines. It represents more than a $6-billion investment in Kentucky.

Open since May 1988, and with more than 8,000 fulltime employees, Toyota Motor Manufacturing Kentucky has built more than 11 million cars, including the Camry, Camry Hybrid, Avalon, Avalon Hybrid and Lexus ES 350.

This award carries with it a $10,000 prize in honor of renowned conservationist Aldo Leopold and recognizes extraordinary achievement in voluntary conservation.

It was presented to Tallow Creek Farm in Taylor County, owned and managed by Harry and Karen Pelle and family.

When this family began restoring their land, they contacted the Kentucky Department of Fish and Wildlife Resources for technical guidance. They developed Forest Stewardship Plans with the Kentucky Division of Forestry, and took advantage of USDA programs for forest management.

Their nearly 1,330 acres had a long history of logging and occasional wildfires, which left mostly small-to-medium saw timber with less desirable species. The family has been working to improve timber quality through cull tree removal and mid-story removal for regeneration while harvesting dead and low-quality trees for firewood. This has not only improved the quality of forest crops, but has significantly improved wildlife habitat.