By Lanny Brannock and Carrie Searcy

The smell is what you notice first. It smells like a crackling fireplace or a bonfire, but then you see the blanket of blue smoke wafting over Pine Mountain. And you understand. It’s early November and wildfires are consuming thousands of acres in southeast Kentucky.

It’s been nearly a month since Gov. Matt Bevin declared a wildfire emergency and in that time more than 320 fires have consumed more than 49,000 acres in 49 counties. More than 500 people have worked tirelessly, many around the clock, to contain the fires, to keep them from spreading into homes, commercial buildings and threatening lives.

The State Emergency Operations Center (SEOC), located at the Boone National Guard Center in Frankfort, has coordinated the response effort since Nov. 3. But the boots on the ground can be found in places such the Kentucky Division of Forestry (KDF) office in Hazard, Ky., where over the past month a normally quiet office has turned into a focused firefighting hub filled dozens of men and women who come from and go into the blazing forests in eastern Kentucky.

“We had been fighting fire for about three weeks straight before this mobilization even began (in late October),” said Morgan Combs, an Incident Commander (IC) for the Division of Forestry. “We have worked from 8 am until midnight every day – pretty much since the first week of October.” 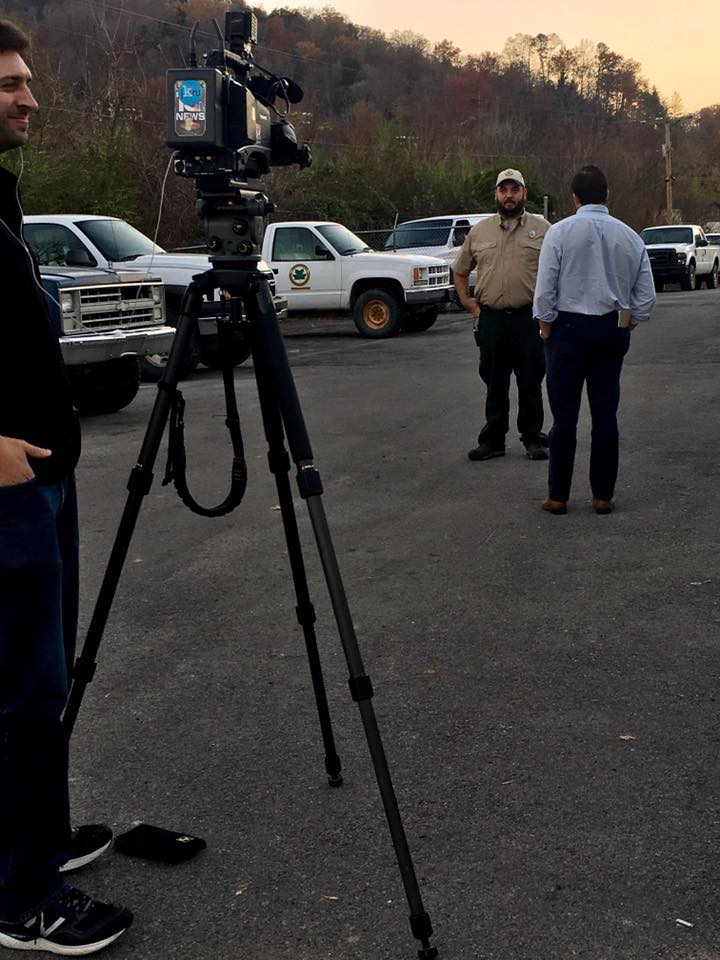 Morgan Combs is interviewed by the press.

As IC, Combs took on the role of an amateur meteorologist, constantly pouring over the weather forecasts, knowing how it affected the fires’ behavior and intensity. “Humidity, dew points, wind direction and speed…you name it,” he said.

White locator tags mark the temporary office spaces, where laptops, cell phones and coffee cups adorn desks stacked with the latest stats. The building is abuzz with radios crackling with news of a new fire or instructions on how to put out an old one that has restarted. Spirits are high but the eyes look tired.

The first wildfires were reported in southeastern Kentucky in October. Widespread dryness and unseasonably warm temperatures fueled the first fires that in the first week consumed more than 29,000 acres in the eastern half of the state. Many were deliberately set. Officials estimated as many as 76 percent were caused by arsonists. Despite arrests for arson and for ignoring burning bans, some Kentuckians continued to put lives and property at risk.

New efforts were thrown at preventing arson. The KDF had entered into a Memorandum of Agreement (MOA) with Kentucky Department of Fish and Wildlife Resources (KDFWR) Division of Law Enforcement for the fall 2016 and spring 2017 fire seasons  as a pilot program to combat arson.  During the wildfire emergency, F&W law enforcement officers (LEO) increased patrols and conducted arson investigations within a 5 county area to curtail arson activities.  As a result of this pilot program, 40 burn ban citations were issued and 8 arrests for arson were made.  An additional three arson arrests were made by other law enforcement. With this effort, new fire starts were lower than previous years due to KDFWR law enforcement presence.

With Kentucky having had only 40 to 75 percent of the normal precipitation over the past 90 days, a Stage 1 drought was declared, indicating moderate to severe conditions, primarily affecting soil moisture and vegetative health.  Burn bans were enacted in more than 100 counties, and local community water systems, especially those with drought-vulnerable sources, were asked to re-familiarize themselves with their water shortage response plans.

The drought already has had an effect on agriculture operations. Cattle producers were feeding hay, as pastures suffered due to the lack of rain. And crops like winter cover wheat struggled to get out of the ground or to germinate, putting producers at risk for soil erosion over the winter months.

Those who came from other parts of the state had to acclimate to the more hilly landscape.

“I’m used to flatter ground in the western part of the state,” said James Armstrong, a Forest Ranger Technician whose home office is west of Paducah. “You really have to rely a lot on the locals and people who are familiar with this area to find access and figure out how to work in this kind of terrain.”

Sarah Gracey, a public information officer who has been at the Hazard office for most of November, said the cooperation among state agencies was a big help, but it also presented a challenge for Forestry officials dealing with fires in difficult terrain popping up on a nearly hourly basis.

“That’s a lot of the organization that the incident management team does,” Gracey said. “We look at logistics, planning, operations, information and we try to make all the pieces fit together where they make sense.” 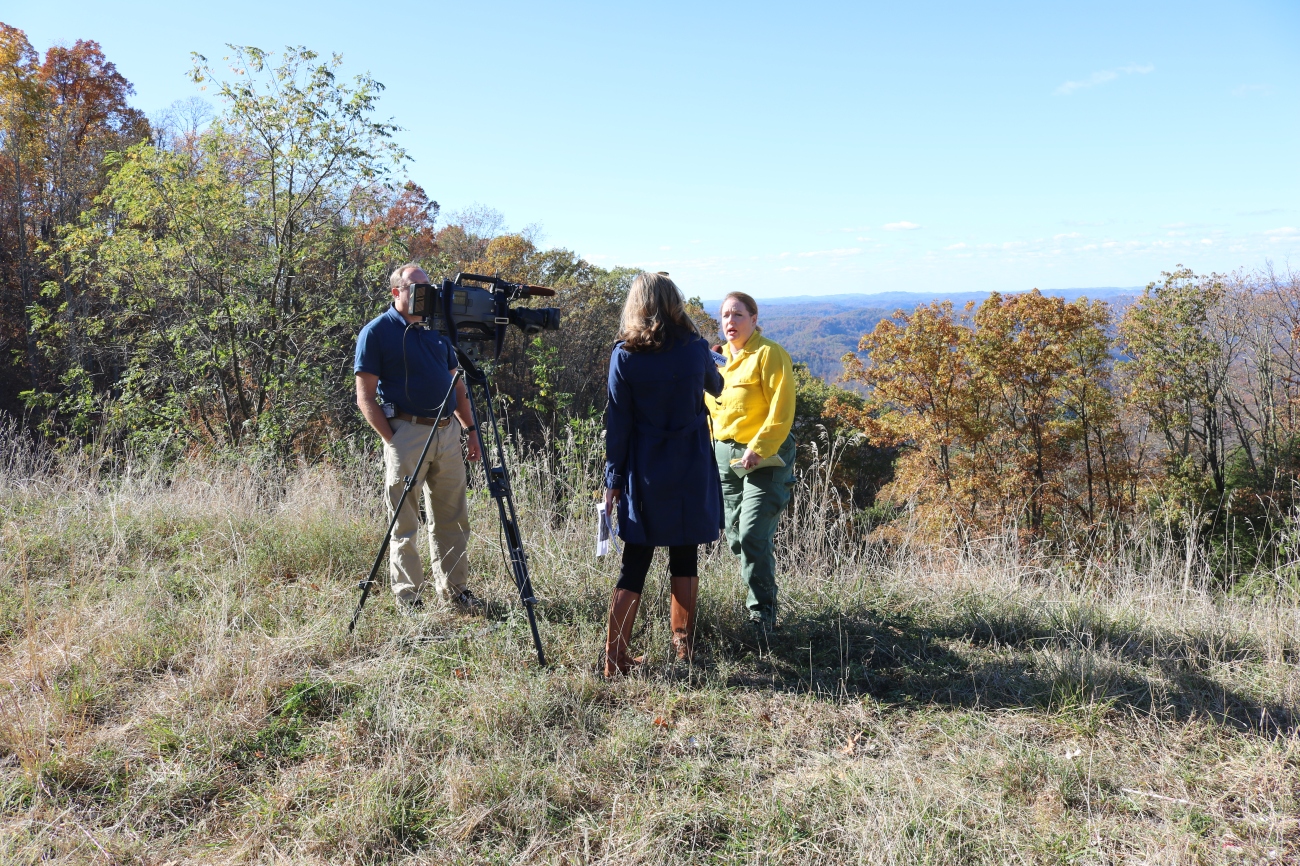 An interview with WYMT and Sarah Gracey on Pine Mountain.

The Joint Information Center (JIC) in the SEOC, helped get citizens of the Commonwealth health information following air quality testing in some areas of Bell, Harlan, Knox and Rockcastle counties by the Environmental Response Branch of the DEP, the Kentucky Department for Public Health (DPH), within the Cabinet for Health and Family Services that showed issues with smoke. On Nov. 9, the JIC issued a Public Health Alert – Smoke Inhalation Advisory due to wildfires.

Air quality tests done during that time showed values that were unhealthy for sensitive groups such as people with respiratory disorders including asthma, chronic obstructive pulmonary disease (COPD), emphysema, etc. While these were temporary and variable due to wildfire surges, wind shifts and blown smoke from more southern states, the U.S. Environmental Protection Agency (EPA) recommended that areas with hazardous levels temporarily cancel outdoor events and consider closing schools and workplaces.

While all that was ongoing, more than a dozen Division of Forestry personnel spent more than two weeks ensconced in a side room at the SEOC 12 hours a day, seven days a week, determined to see the effort through.

Fire Chief Floyd Willis, Deputy Fire Chief Mike Harp, Forestry Director Bill Steele and Assistant Director Steve Kull and a team of others monitored the fires hour by hour, making critical decisions on personnel and points of attack. It had been 15 years since Kentucky last mobilized during such widespread wildfires and for many it was their first experience. “I can’t say enough about the efforts put forth by so many during this time,” Willis said. “Their vigilance and expertise helped prevent what could have been much, much worse.”

Their efforts, and others, were also noted with appreciation by Department for Natural Resources Commissioner Allen Luttrell, who, in a Facebook post, thanked the “dedicated and selfless employees who provided the Commonwealth with magnificent service during this wildfire suppression effort.”

“The efforts of all of these people have taken a bad situation and managed it well so that the worst has not been realized. And not only do I appreciate the sacrifice and effort that these men and women have put forth, so do the people whose lives and property they protect.”

Watch the video at- https://www.youtube.com/watch?v=YpaIrdSOTHo&feature=youtu.be

View our photo gallery at- https://landairwater.me/2016/11/23/fighting-kentuckys-wildfires-a-great-coordinated-effort/