Some days you might visit one of Kentucky’s many public natural areas and you just might catch the director of the State Nature Preserves Commission (KSNP), Zeb Weese, seining a pond while leading a nature tour seeking tadpoles, frogs and newts. 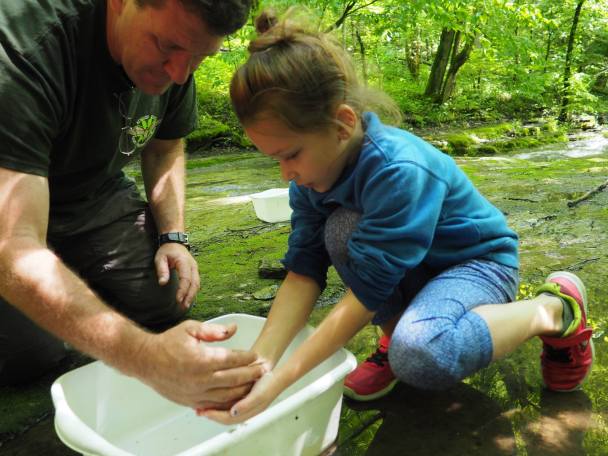 Zeb Weese guides a tour a Floracliff in Lexington, KY and helps a young attendee identify a creek creature. Photo courtesy of Floracliff. 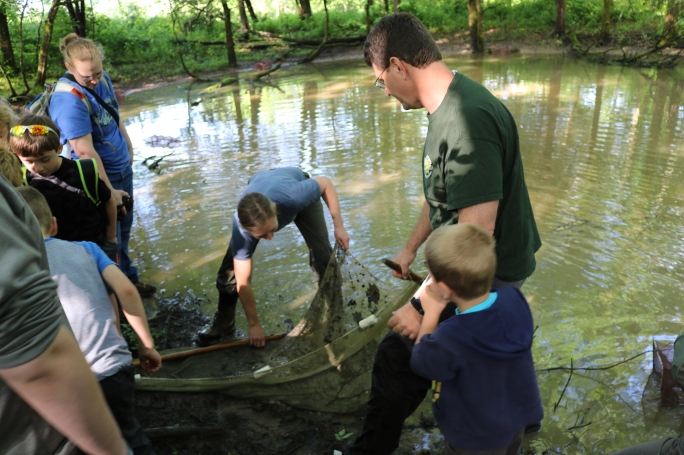 Weese works to dredge a cow pond at Floracliff to show and identify species native to the area. Photo by Carrie Searcy.

As the new director, it is pretty clear- as he wades thigh deep in murky, muddy waters- that he has a deep passion to share Kentucky’s hidden gems with the residents of the bluegrass state and it is pretty obvious he has a hands-on attitude.

“I’m more interested in getting conservation accomplished than in how things have always been done,” said Weese, (46), a Hardin County native and sixth generation Kentuckian. “Let’s look at what we have and do great things.” 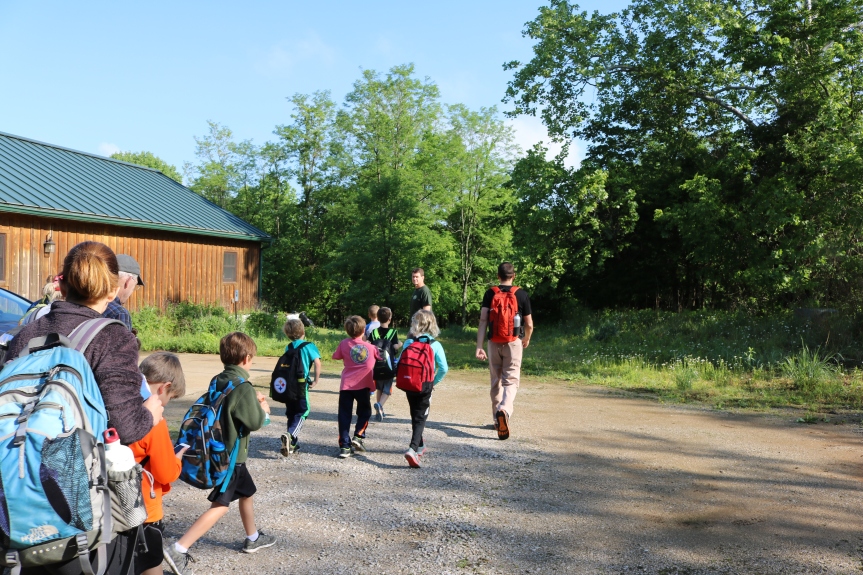 Weese leads the way on a tour. Photo by Carrie Searcy. 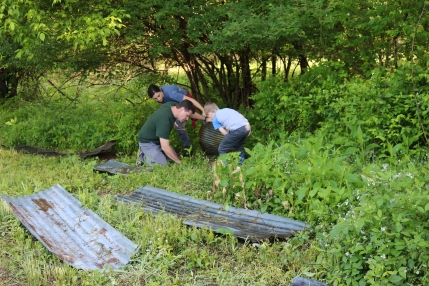 Weese looks under an old piece of tin for anphibians. Photo by Carrie Searcy. 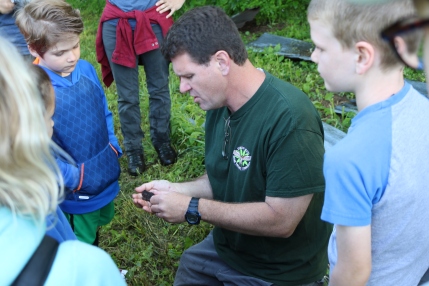 Weese holds a toad for a captive audience as hi give facts about the creature and the species. Photo by Carrie Searcy.

A graduate of the University of Kentucky in 1994 with bachelor degrees in both zoology and history and in 2003 with master’s degree in both forestry and history, Weese first joined KSNP in 2006 as a natural area land manager over central and northeastern Kentucky. In that role, he performed prescribed fire implementation, invasive species control, and zoological studies. Prior to that, Weese had worked at both Kentucky State Parks and at the Kentucky Department of Fish and Wildlife Resources, where he worked as a natural resource manager and a conservation educator. 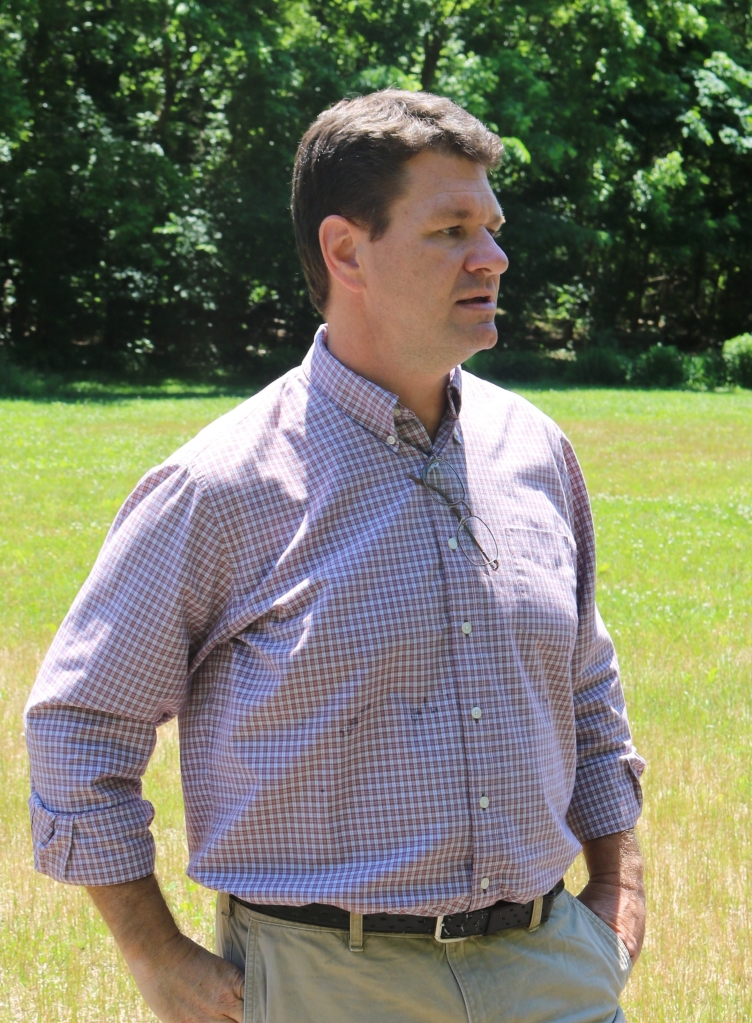 In November of 2016, Weese returned to KSNP as director, when he was appointed by Gov. Matt Bevin.

“Our goal is to promote understanding and appreciation of the aesthetic, cultural and spiritual values of Kentucky’s natural heritage lands and preserves for its citizens and visitors,” said Weese. “We want to get people out there on our open sites hiking, birdwatching and just enjoying nature.” 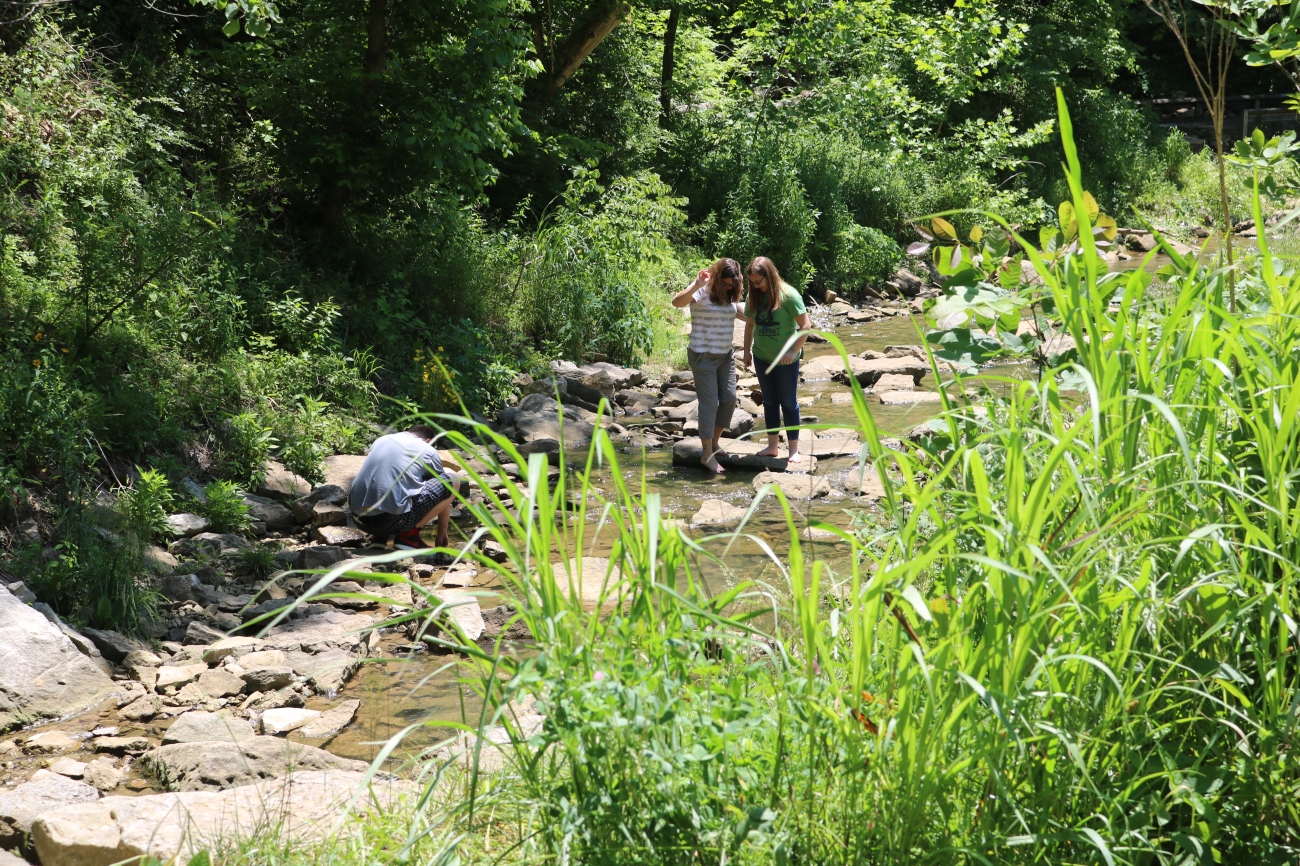 Weese said that is one of the biggest misconceptions about the nature preserves and why Kentuckians do not know more about them.

“One of the main things I want to change is the idea that all our preserves are inaccessible,” said Weese. “Of course you have some sites where you may focus on managing rare species or worry about trash and general damage, but most of that is around your parking areas.  As a whole it is important to get people on site and hiking our open trails and enjoying what the Commonwealth really has to offer.”

And Weese is such a proponent of his ‘getting out there attitude,’ that he gets his family involved as well. On many of his weekend guided tours, one can often catch a couple of little helpers by his side, who are quick to identify a toad, locate a snake under an old piece of tin or find the perfect walking stick for a long hike. 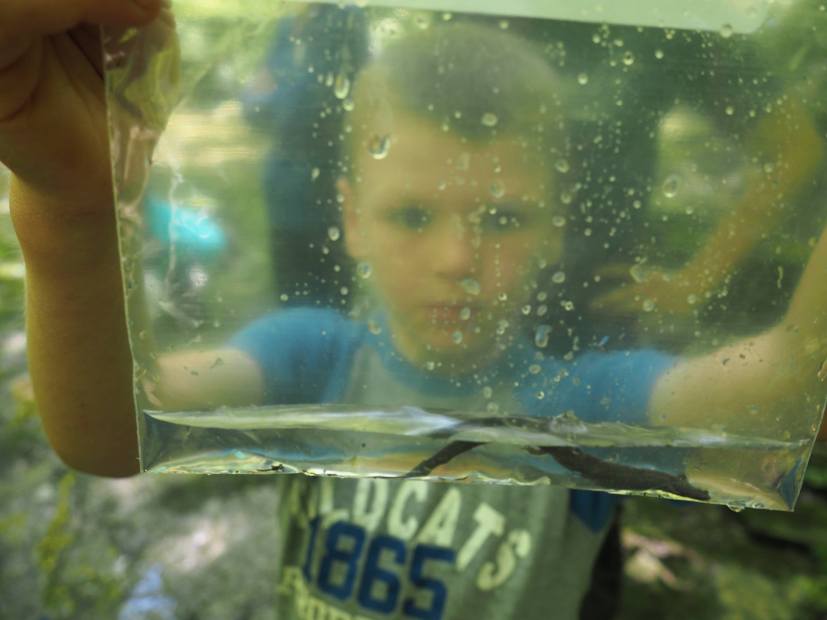 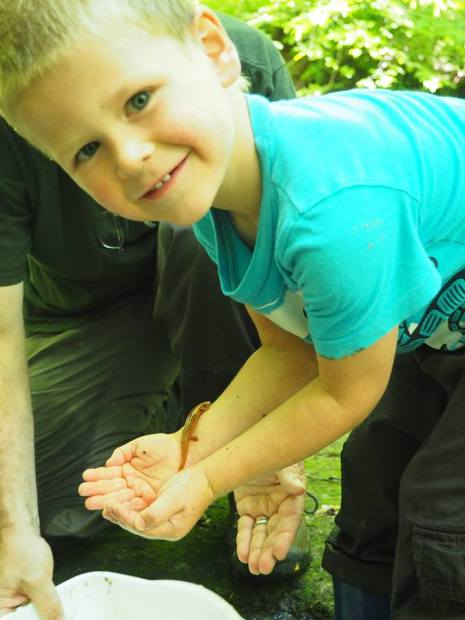 “I have two boys six and 4-and-a-half, with my wife Mary,” said Weese. “Getting them outside and involved is an added bonus of this job.  This position lets me pass on my love of the outdoors and what we are really all about, which is conserving the beauty this state has to offer for our future generations.”

And the conservation work that Weese is doing is important to preserve the natural heritage of Kentucky.

“Well, one of the things we do is catalog what species, both animal and plant, that we have at each preserve,” said Weese. “We have to know what we have before we can manage it.” 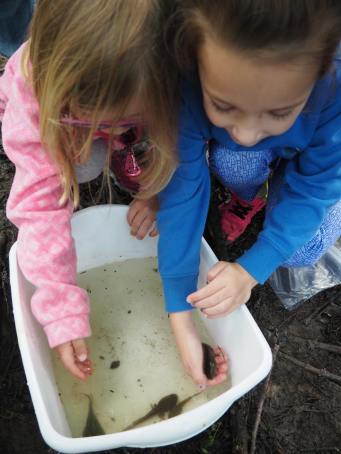 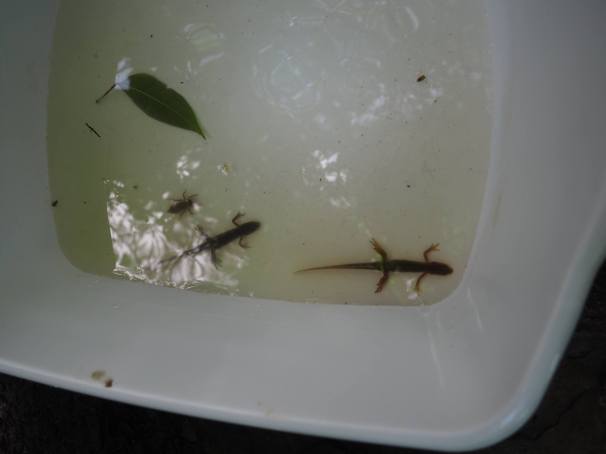 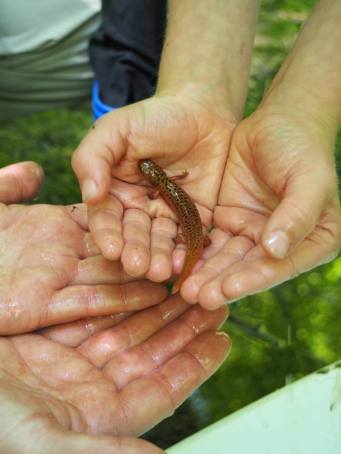 A red newt. Photo by Floracliff. 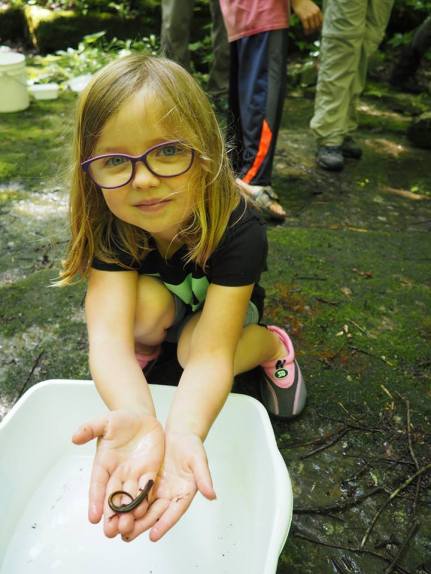 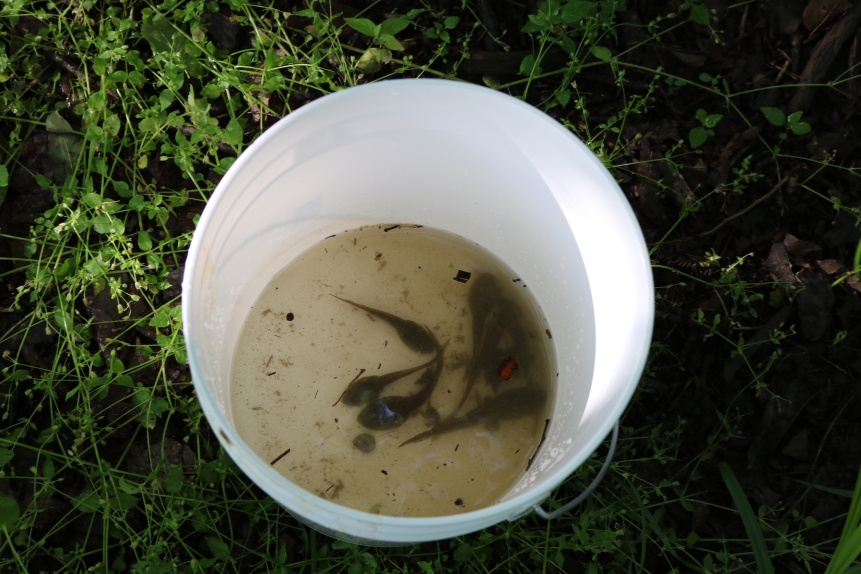 Managing it however, can be a bit trickier than one may think, and that is where Weese’s background with invasive species comes into play.

“Without the work that we also do to combat invasive species, such as honeysuckle for example, important areas of native plants would be completely choked out,” said Weese.

Its focus on conservation and natural habitats are some of the things that set nature preserves apart from typical parks according to Weese.

“People often get nature preserves and parks confused,” said Weese.  “Nature preserves protect and research the flora and the fauna, where parks tend to focus more on developed areas.”

“We are also working on having clear and concise signage for all our areas that make us stand out from parks,” said Weese. “Our preserves allow you to step into a natural habitat with hiking, conservation and bird watching, and that’s a big niche.” 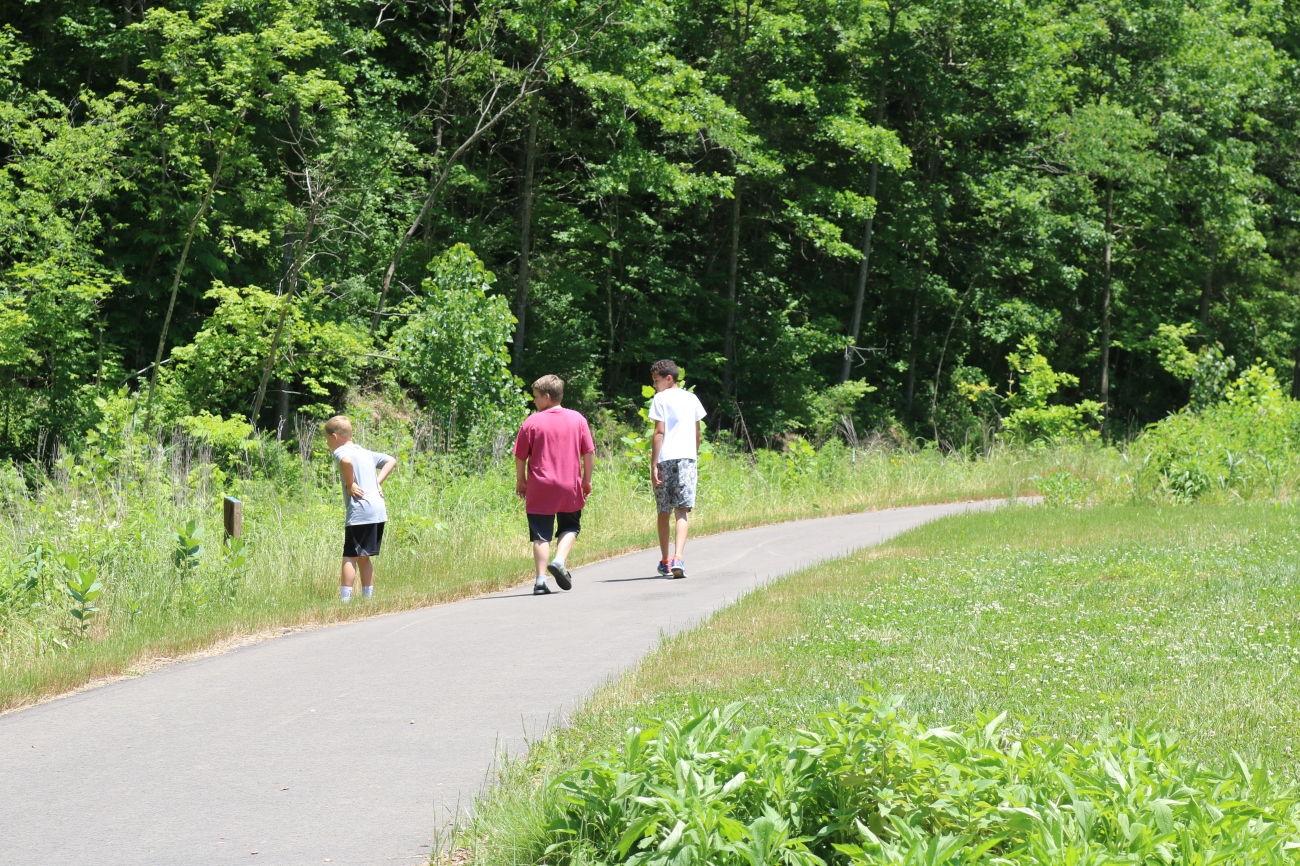 Boys hike along a trail at Cove Spring in Frankfort, KY. Photo by Carrie Searcy.

Weese also has some big plans for improving the web presence of KSNP.

“When I started my career, I used a compass and a pencil,” said Weese. “Those days are long gone.  We want to totally revamp our webpages we have now to be more mobile friendly and more accessible to the outdoorsman or woman in the field.”

This would include modernizing the already existing websites for both KSNP and KHLCF.

This revamp would also include useable data of the already collected species at each preserve and aggressively cataloging each current and new species that inhabits each preserve across the state, making it into what Weese calls a one stop shop. 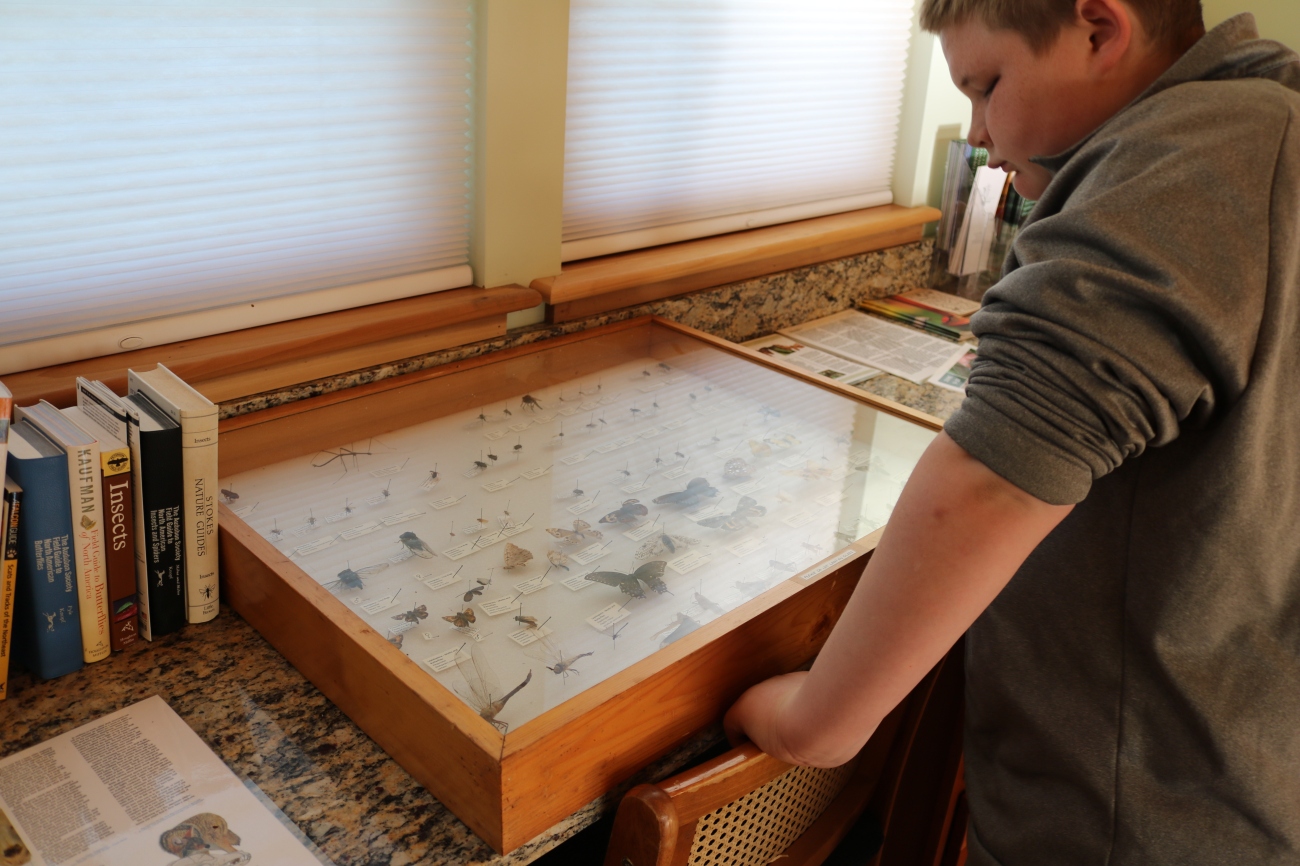 For the future Weese is hopeful to expand the current 150 natural areas and possibly acquire new ones. He says none of this would be possible however, without the funding by the KHLCF and the Kentuckians who purchase “Nature’s Finest” license plates each year.

“Much of our land management funding comes from the purchase of the “Nature’s Finest” license plates each year,” said Weese. “Each purchase of a plate is one thing that we can all do to make a difference in the conservation of our Commonwealth.” 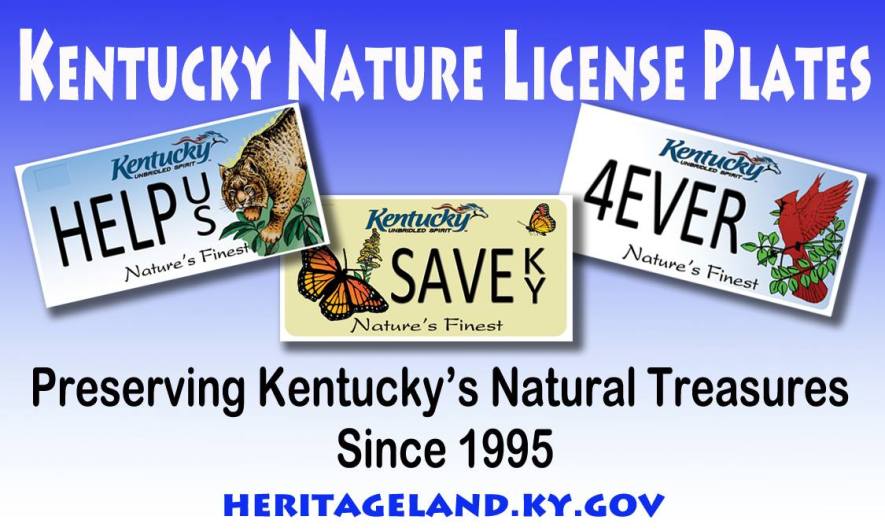 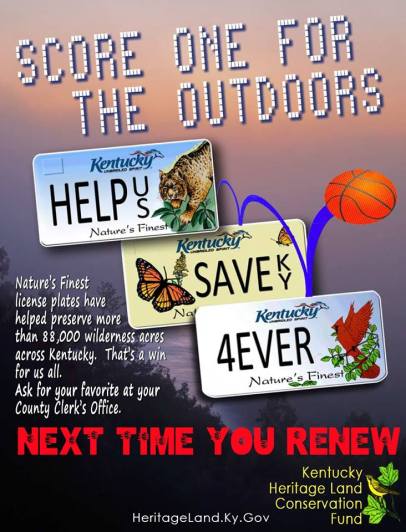