Bats in the state 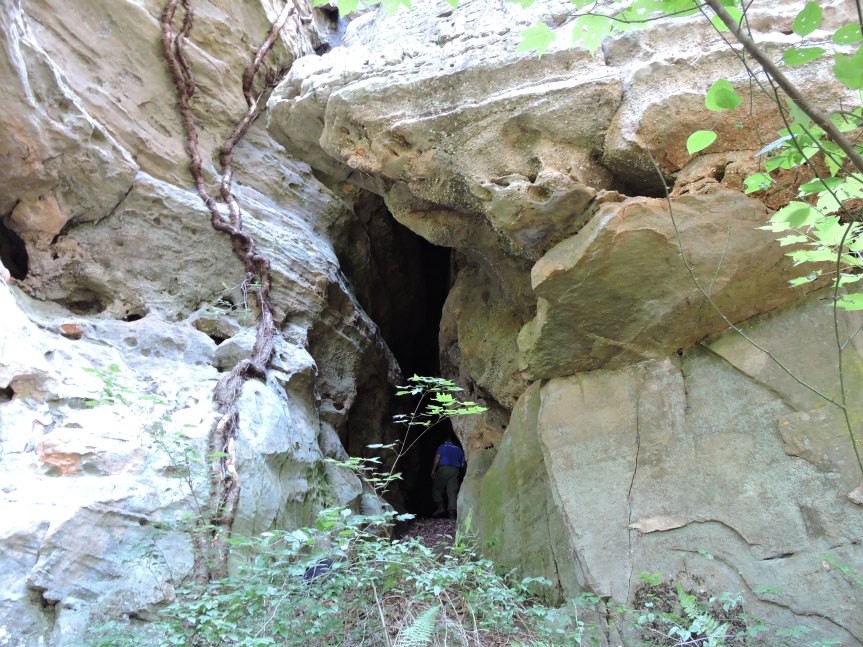 A cave known for its bats inhabitants. 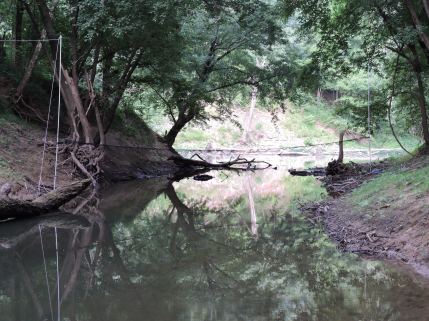 The net is strung that will help catch bats for study. 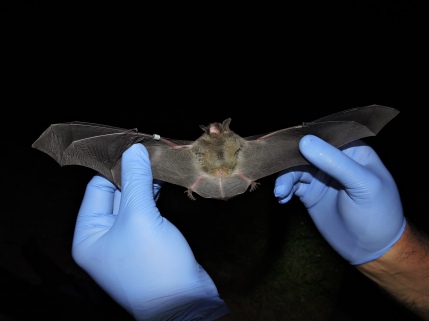 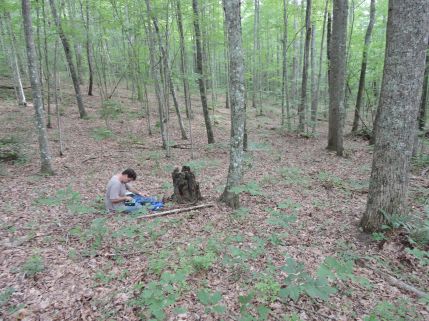 Zeb Weese sits quietly as he works to tag and release. 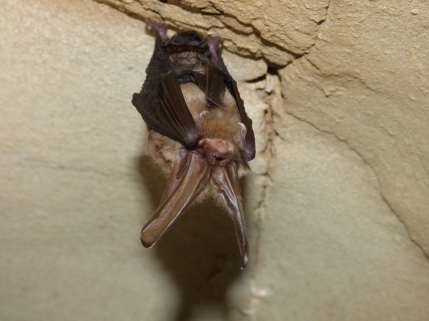 The Kentucky Heritage Land Conservation Fund (KHLCF) conserves 90,000 acres statewide, from the banks of the Mississippi River to Cumberland Mountain on the Virginia state line. One of its most significant partners in conservation is the Kentucky Division of Water’s Wild Rivers Program (DOW), which owns nearly 6,000 acres of public land thanks to KHLCF funding. While these sites provide opportunities for people to hike, paddle, and hunt, they also protect the habitat for many species of wildlife, including some that are rare or endangered. Because the focus of the Wild Rivers Program is to protect forested land along the nine officially designated wild rivers, forest-dwelling bat species particularly benefit from this habitat conservation. Unfortunately, due to overall habitat loss and the impact of “White Nose Syndrome”, a disease that is devastating hibernating bats throughout the Eastern United States, bat populations in America are declining at an alarming rate. Several Kentucky bat species have been on the federal endangered species list for decades, but another (Myotis septentrionalis,  the Northern long-eared bat) was just added in 2015 with the possibility of more species added in the years to come.

Not only does the KHLCF help agencies like DOW purchase and conserve natural land for future generations, it also helps them manage the land to improve habitat. However, before land management begins, it is necessary to determine what species live there, or could live there with the right management. Biologists from the KHLCF and DOW regularly conduct zoological inventories to monitor the use of these natural areas by wildlife, including special bat surveys to determine the presence of rare bat species and guide habitat management strategy. These surveys often involve physically capturing bats using mist-nets, which are fine-meshed nylon nets specifically designed to catch bats. These nets are strung between two poles typically 30 feet apart, set above a creek or other water source at dusk, and then checked every 10 minutes for several hours during the night. The particular species of any bat captured is identified, measured, evaluated for damage, and the released unharmed. Sometimes, other animals moving through the forests during the evenings are caught in the mist nets. From prothonotary warblers to flying squirrels, even to the occasional coon dog – a bat biologist never knows what to expect when the nets are up and the survey begins! In 2014, Western Kentucky University’s PBS station filmed a KHLCF bat inventory on the Green River for their Main Street program, which may be viewed on YouTube (https://youtu.be/cXdmXm1bM1A).

Not all bats are federally endangered, of course, but because of the potential to capture endangered species by using this method, biologists must first obtain a federal permit from the US Fish and Wildlife Service before attempting to capture bats. Over the last few years, species identified at KHLCF sites include the federally endangered Indiana bat (Myotis sodalis) and the gray bat (Myotis grisescens), and the federally threatened Northern long-eared bat, as well as the more common Eastern red bat (Lasiurus borealis) and the big brown bat (Eptesicus fuscus) among others.

In addition to netting bats, acoustic monitoring is also conducted. While searching for insects, bats call at an ultrasonic frequency to detect prey by using sonar. Special bat monitors are deployed in suitable habitat to record these bat calls.  Each bat species calls at a slightly different frequency. These calls are then downloaded onto computers and analyzed by special software which can indicate which species made each calls. This technology is not quite advanced enough to guarantee accurate identification, but it is getting better all the time and very useful when used in conjunction with netting.

Kentucky is home to approximately 15 species of bat. Some species, like the Eastern red bat and big brown bat, occur statewide in a variety of forested (and even urban) habitats. Other species occupy more restricted habitats; the Virginia big-eared bat, for example is only found in nine eastern Kentucky counties where it inhabits caves in oak/hickory or beech/hemlock forests. Regardless of your location in the state, your local bat population provides an important value to your community. From preying on mosquitos that can ruin your family picnic, to controlling populations of crop pests that cause significant economic loss to farmers, the bats you see flying along the tree line at dusk benefit humans everywhere.

While bats are very important to have around, sometimes they can get a little too close. From swooping down to get a drink out of a swimming pool while you’re taking a midnight swim, to roosting in your attic, bats may utilize a variety of human structures. Bridges, houses, chicken coops, and barns are used quite frequently as ‘roosts’ for several bat species. While some of these roosts sites can be a nuisance, and quite often require relocating the bats, it is important to contact a professional nuisance wildlife control operator to conduct any activity involving removal or exclusion of bats from a structure.

It is important to know what species call these areas home for a couple of reasons. First, it helps managers determine the best locations for trails and other infrastructure without disturbing habitat. Next, it opens up partnerships with other organizations such as the Imperiled Bat Conservation Fund and the Kentucky Natural Lands Trust that focus on the conservation of these rare species. Finally, it is gratifying to just know that that your “Nature’s Finest” license plates not only get you places to hike, but also provide homes to unique critters that make Kentucky’s forests special.