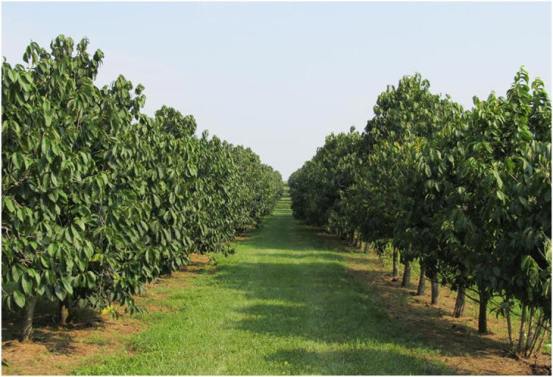 An orchard of pawpaw 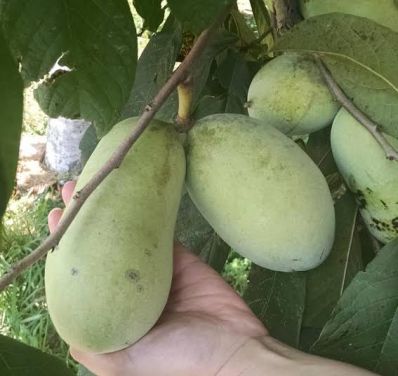 Pawpaws hang from a branch.

The inside of a pawpaw.

The Kentucky Division of Forestry

Thomas Jefferson had these growing at Monticello.

The Lewis & Clark expedition relied heavily upon then when their supplies ran low. Native Americans not only ate their fruit, but used the strong fibers for cordage.

The Pawpaw tree has been lauded in song and its fruit praised for its taste, described as a combination of mango, banana and pineapple.

So with all of this notoriety, how did this large, green fruit – grown in 26 states, spanning across the south and Eastern U.S. – lose favor with Americans?

Well, it doesn’t travel well. The ripe fruit’s custard-like consistency mushes easily and has a shelf life of only two or three days, too short for commercial markets. And its appearance – speckled yellow-green skin and beanlike shape – can be off putting to some.

And, as humans began scavenging supermarkets instead of forests, we simply forgot about the humble pawpaw.

Not any longer. The pawpaw is making a resurgence, largely through the efforts of local farmer’s   and the Kentucky State University (KSU) research farm which is actually home to the world’s largest pawpaw research program.

“We’ve had a pawpaw research program at KSU since 1990,” said KSU’s Sheri Crabtree, who goes far and wide across the Commonwealth to improve and promote pawpaw knowledge and love. “And since that time, we’ve done cultivar variety trials and breeding and released a variety called KSU Atwood and the KSU Benson. We hope to release more varieties in the next year or two and we work with the growers, too.”

And more and more growers are cultivating pawpaw orchards just like they would any other fruit tree. And consumers seem interested in trying the fruit that connects them to their grandparents, great-grandparents and even to our founding fathers.

“There is more interest in locally grown foods and Kentucky food history,” said Crabtree. “A lot of nostalgia is connected to food and the papwpaw is one of those in the local food movement.”

You can get these trees through the Kentucky Division of Forestry, which sells pawpaw seedlings through its two nurseries. Every year the division harvests seed from KSU and offers seedlings for sale to the public. You may order them online now at http://forestry.ky.gov/statenurseriesandtreeseedlings/Pages/default.aspx and pick a delivery time in Spring, as the two-year-old seedlings are best planted in early Spring. They are priced in bundles of 10 for $35. If you only want a tree or two you could consider sharing with your neighbor or donating them to a park or school.

A fully mature pawpaw tree takes seven to eight years to produce fruit. But the possibilities of what you can make with pawpaws may surprise you. You can find recipes for pawpaw ice cream, bread, sorbet, tea, soda, cake, pie, sauces, muffins and even beer and wine.

“Basically you can substitute a pawpaw for anything you would use a banana for,” said Crabtree. “As a unique crop they are in high demand, they are also an attractive tree and what we call edible landscaping.  There is so much potential.”